The One with Wizard and Wand: The Great Harry Potter Festival 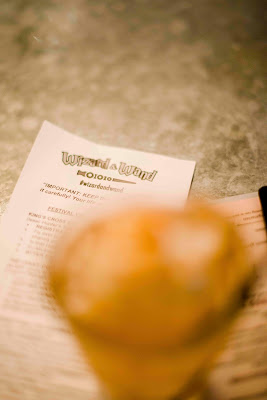 Last night, I was able to attend Wizard and Wand: The Great Harry Potter Bar Crawl in downtown Raleigh, North Carolina. I found out about the event shortly after tickets were released and immediately purchased my entry to what sounded like a magical event.  It was after purchasing my $15 ticket that I then started inviting anyone who may be interested, so that I would not have to go alone. I ended up going with the perfect group, and we had such a fun time despite the many let downs of the event.
The bar crawl started at 3, but we were not able to arrive until around 4:30. This ended up being a blessing, as I've since heard that those who arrived on time were in line for almost twice as long as us. The line was wrapped around two street corners, which was a bit daunting, but it moved quickly.  We stood in line for 45 minutes, but honestly, I expected this after seeing the thousands of RSVPs on the Facebook event.
What I didn't expect, was the disarray that then ensued. When I purchased my ticket, the website said that the ticket would include
a wristband allowing access to 14 establishments
HP bar crawl drink specials (lackluster)
a cauldron crawler cup
a butterbeer sample (was apparently 2 oz. of root beer)
a welcome shot
band performances
being shot by the event photographer
entry into the costume contest
DJs and dancing
access to enter trivia
access to find all horcruxes first for a prize (photos of random objects taped inside of 7 of the establishments)
new friends (only because Pottheads are the best)
up to $50 in free ride credits (nowhere to be found)
and a few surprises (apparently "a chopstick dipped in wax" is surprising)
But honestly most of the things that were promised didn't happen. Nobody even scanned our tickets. They barely glanced at my phone, handed me a paper wristband and two pieces of paper, both of which ended up being useless, and gave no information on how to retrieve what was promised to ticket holders.
I'll admit, we probably didn't proceed as was advised by the event throwers.  We made most of our decisions based on not wanting to wait in line.  But I am so glad that we did.  I believe this is why we had so much fun, while many other people did not. {Many people are now filing complaints against the host company}
Most people got their wristbands, then got directly into another long line to get into Kings Cross Station (Isaac Hunters). After being in line for close to an hour, we had no desire to wait in another line.
Instead, we first headed toward Jimmy V's where we got our first Butterbeers! Without waiting in line. 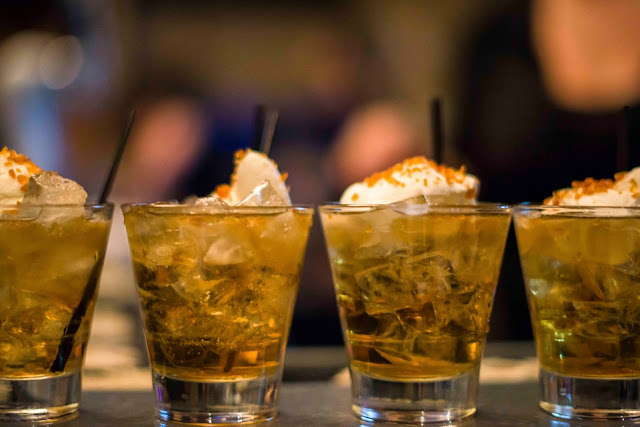 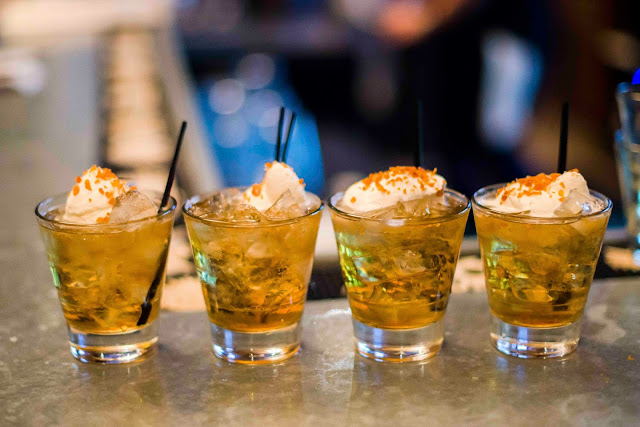 Maybe the long line that we skipped was where we were supposed to go in order to get our crawler cups, welcome shots, and ride credits? If it was, then oh well. In the end, we were all glad that we chose not to spend the majority of our time in line just for things that we wouldn't even have ended up using.
From Jimmy V's, we made our way down Fayetteville Street. We skipped past the long line to get into Coglin's. The Big Easy had no line but had run out of their Harry Potter drinks an hour earlier. Lame. Pizza La Stella was next on our Hogwarts Express. The wait for a table was an hour and fifteen minutes, and the bar was slammed with other Pottheads. So we put down our name for the wait for a table and headed to the last place on the list for Fayetteville, Paddy O'Beers. They basically had just normal specials. We got one round, and skipped on over to London Bridge Pub. Here, we got a round of HP drinks, I think the name had something to do with patronuses? 3 out of 4 crawlers recommend. 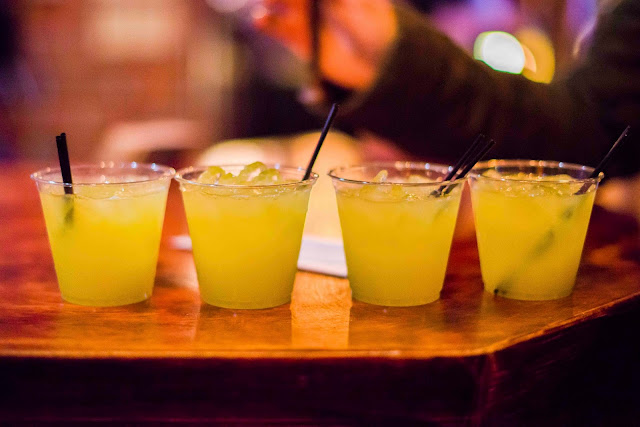 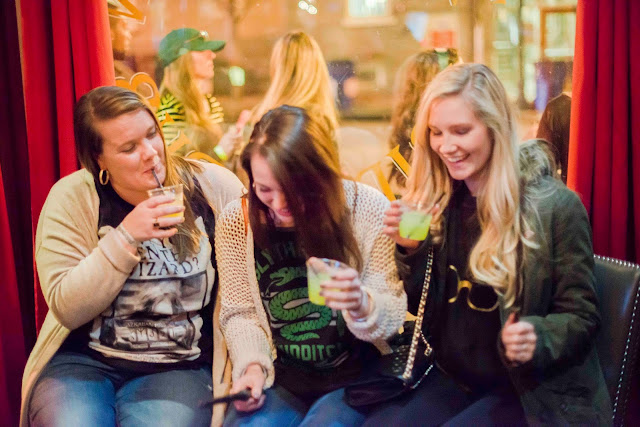 We could hear the bumpin' music from The Architect, but there was a line, so we decided to check on our status at La Stella. We ended up eating some delicious pizza, getting some drinks, then heading back to The Architect to join the dancing Pottheads. We got a round of HP drinks here too. They were hot pink, and none of us could hear what they were called, but they were delicious! We got our name on the list for the secret bar behind the book case, but our time slot was going to be around 12. So we danced until it was time, 9PM, to run over to the Great Hall (Market Hall) for the costume contest, which we were really excited to watch! We did have to wait in a short line at this point, but once we got into the Great Hall, we were lucky enough to get seats in the front row and Butterbeers (the best drink of the night) without waiting in line. Right in time for the contest!! 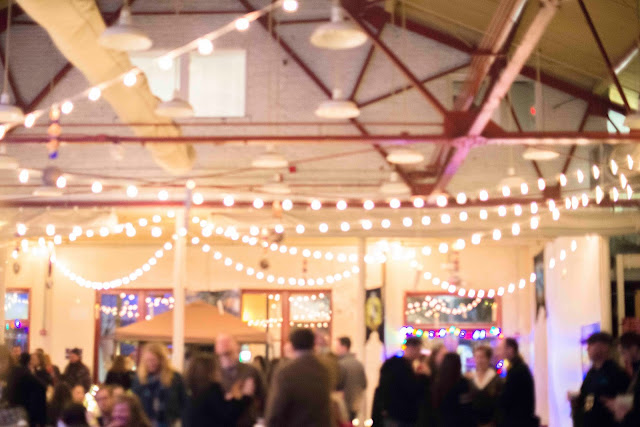 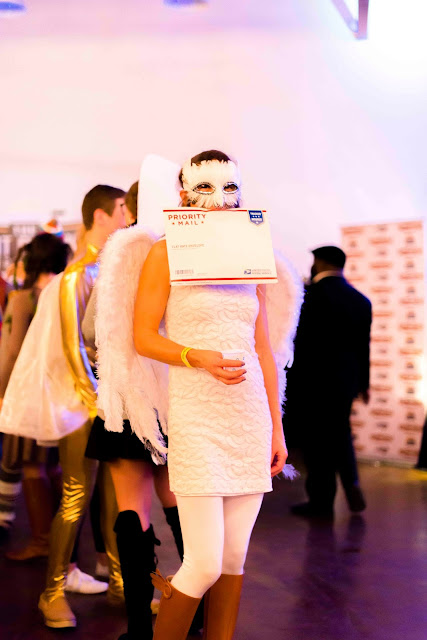 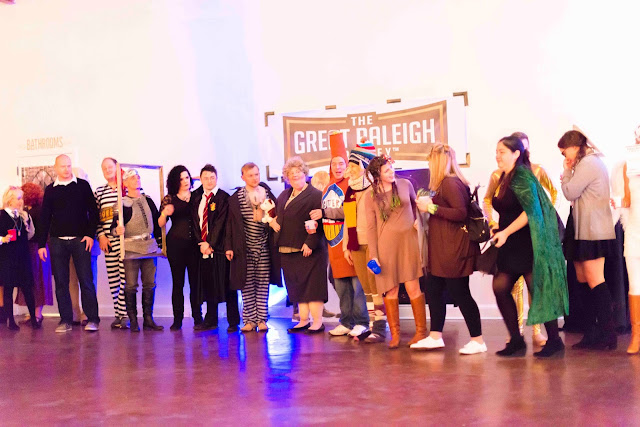 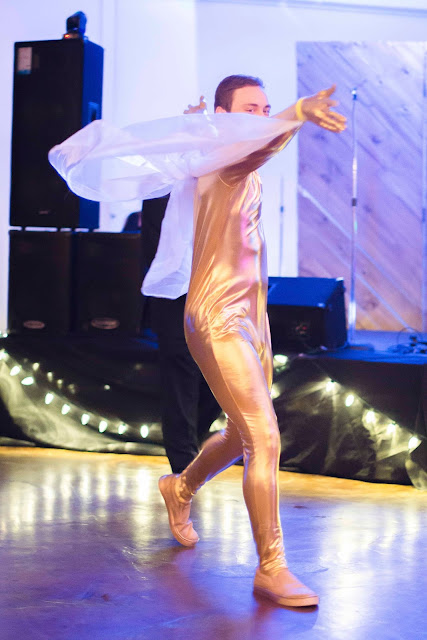 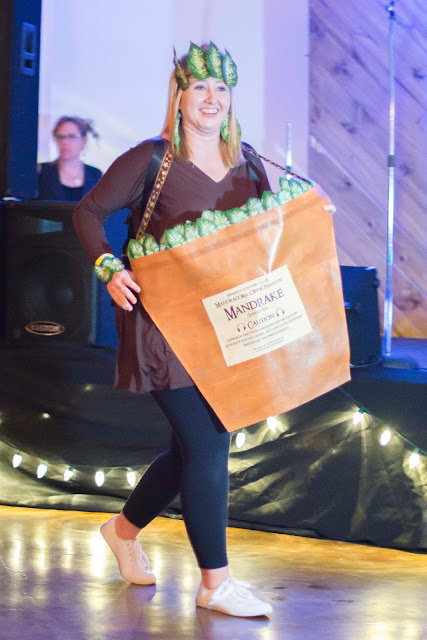 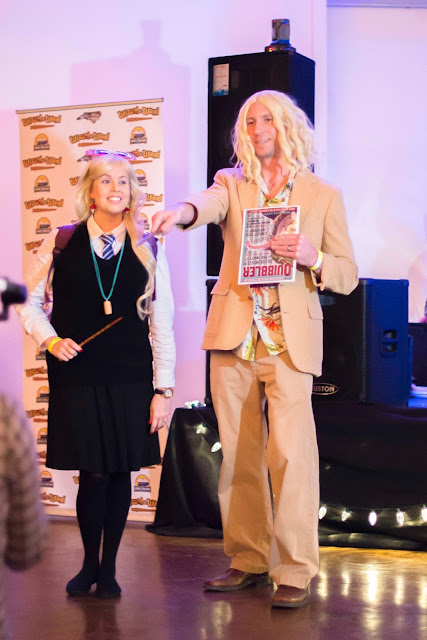 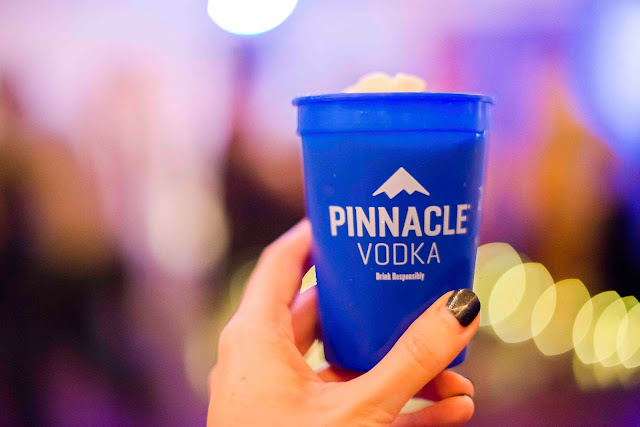 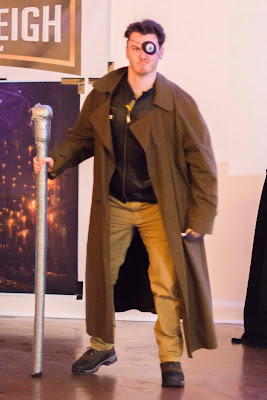 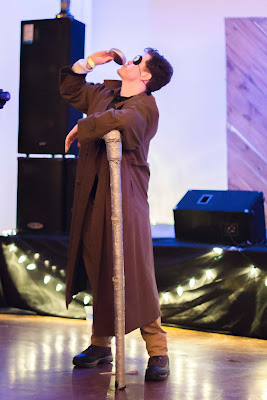 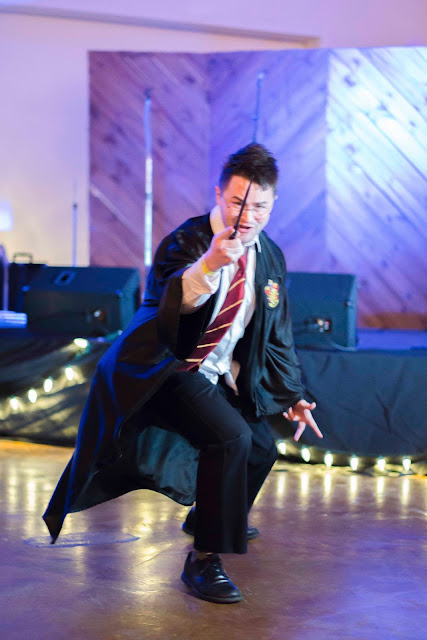 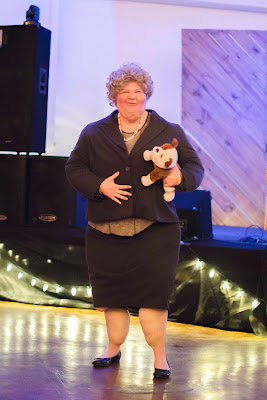 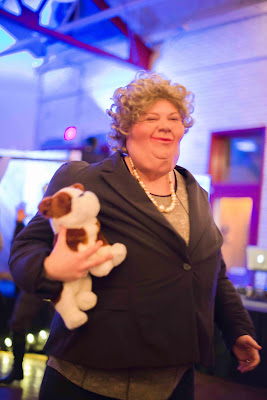 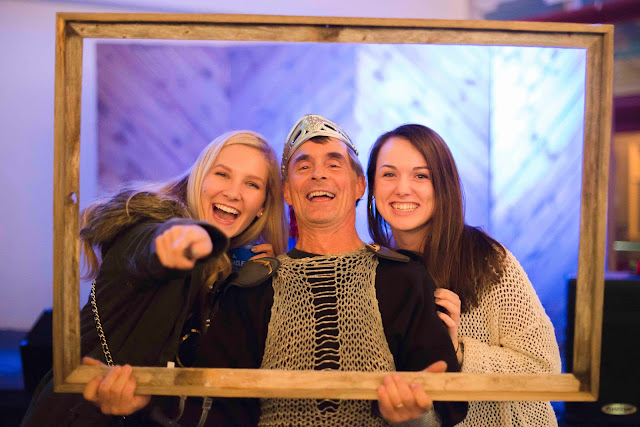 The contest was the finale of the event, so we all danced our way out and about to the rest of downtown Raleigh. The night was so fun, but the event was not nearly as decked out as I expected. No place was decorated as a Hogwarts location and the "Knight Bus" wasn't decorated purple, which was really disappointing to me personally. The people who attended the event were what made it a great time, but I would've been very annoyed had I been one of the many who paid more than $15 for a ticket. 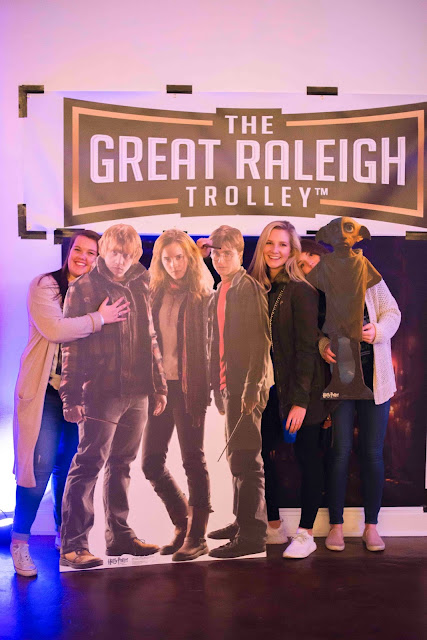 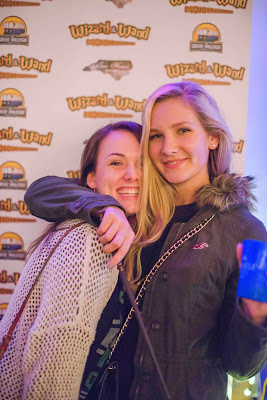 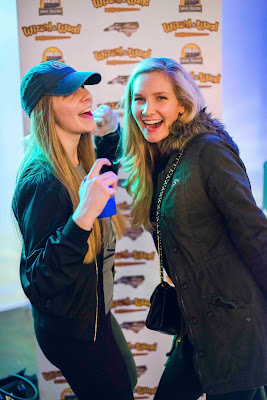 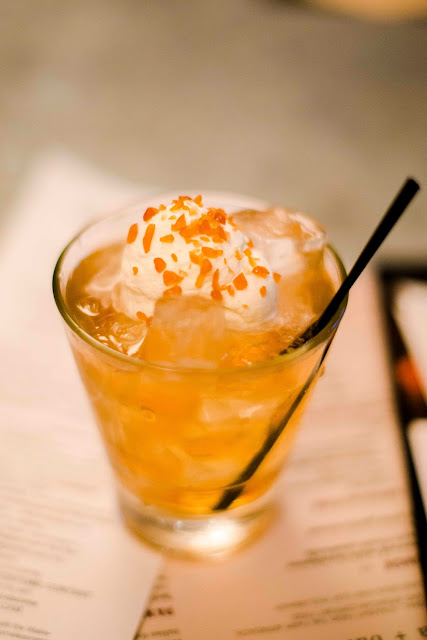 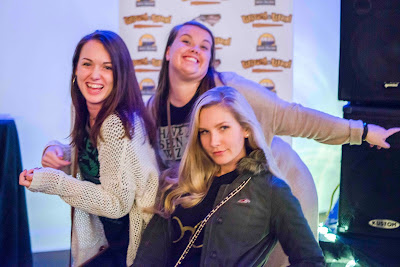 The moral of this story is to surround yourself with awesome people, and your surroundings will not be able to bring you down. Here's to all the Pottheads who braved this and made it a good time on their own. Cheers and Butterbeers to us!